The New Way To Learn Guitar

Getting the best from the course

This course is split into two parts, the theory and the practical.

The idea is you get all the theory knowledge you’ll need to get on your way; but not so much that you’ll be bored and feel lost.

We recommend doing the course in order and reading through everything, but.....

We fully understand that everybody learns guitar in different ways. If you wanted to skip part one of the course and move on with the practical, do it but make sure you read the theory later on. At some point you will wonder why things work and we promise it will make you a better player for understanding a little theory.

It’s also worth re-reading the theory a few weeks after first reading, it’s sometimes easier to take in a second time.

How to do the course

Little and often; try to do small blocks of the course over time, don’t rush through it and wonder why you’re not Van Halen at the end. Take it slow, work on the ideas, get your chords right and take the theory knowledge in. That’s the best advice we can give. Try to play several times a week, everyday if possible and most of all enjoy it.

Let’s talk through the differences between electric and acoustic guitars. They both have the same amount of strings and they both tune the same. Chords and lead playing are the same on both.

At the start, lessons are the same whichever you learn on. It basically depends on the sound you want to make and this determines which is better to start on. People say all the time that you should start on an acoustic.... Not true. If you want to rock out like Hendrix an electric is for you; if you want to pick the guitar up and strum through a handful of chords and make that singer songwriter sound an acoustic is for you.

As you progress on the instrument they take very different paths. You can see the differences just by looking at them. An electric has more frets so you can get higher notes and tends to be a little faster as the string gauge is often a little thinner. But in the beginning when you first start out they’re the same. An A chord is the same shape and the notes are all in the same place on both styles of guitar; the real question is what do you want to sound like! 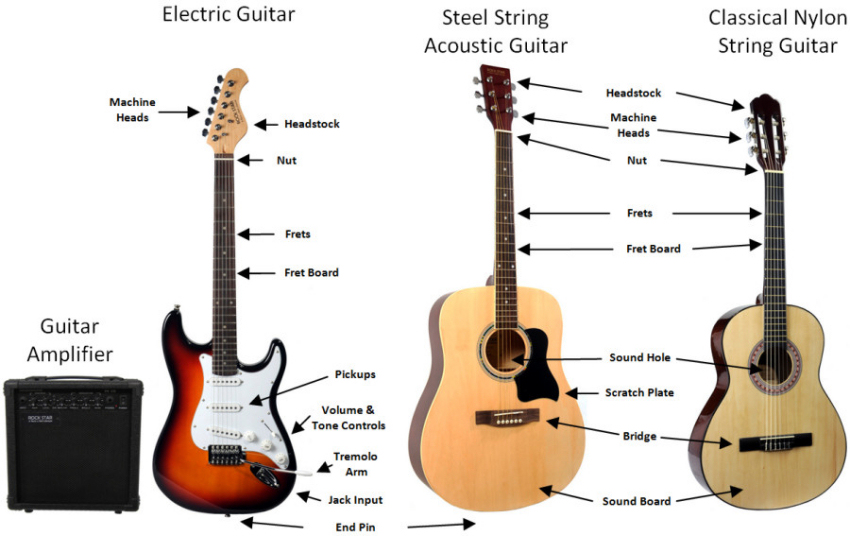 Video 2 - Parts Of the Guitar