To get the best impact from any bass line it’s important for notes to be played cleanly and individually.

To achieve this we must be sure that we only let the strings ring out that we want to.

If notes are left to bleed over one another and other strings are accidentally caught the bass line starts to sound messy and we lose clarity.

Also because the bass guitar is usually amplified any unwanted noises are amplified too!

To avoid this from happening we use string muting techniques. This means using both the fretting and the plucking hand to stop the remaining strings that are not being played from ringing out or making any sound.

This leaves the A string to ring out alone whilst the remaining 3 strings of the bass are silenced.

You can use the 1st finger to mute by gently laying the finger over the strings, but not pressing down to the fret. When fretting with the 1st finger it helps to press with the pad rather than the tip. This will leave the finger straighter and closer to the fret board and in a better position to mute the remaining strings. 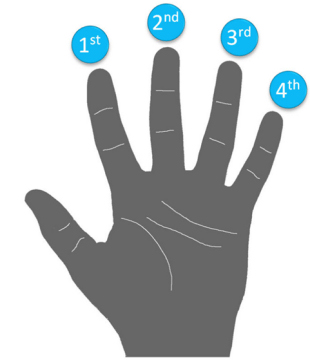 So by using both the fretting and plucking hand to mute you will get good overall control of which strings play and the sound produced by the bass.

Play through the exercises ensuring that you are using the muting technique we have looked at for both the plucking and fretting hands. Try to get accurate timing so that each note ends as you transfer to the next.

Things to think about:

In next week’s lesson we will be finding out about the benefits of good string crossing and the techniques used to achieve it.